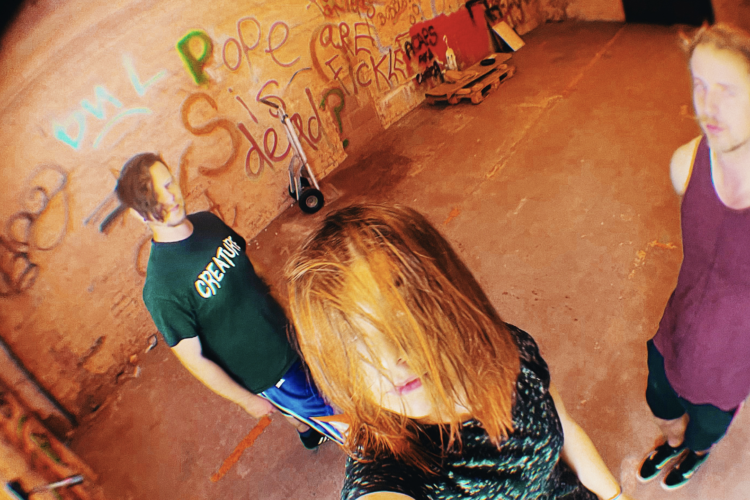 In the grand scheme of caring about stuff, no one would have thought that anyone would have cared about False Advertising, a mere three-piece alternative band with a mildly topical name.

But after recently releasing their most recent EP ͚I Would Be So Much Happier If I Just Stopped Caring͛ to rapturous praise, it͛s possible to say that an increasing number of people do now care about False Advertising. Last year, NME called their brand of slacker-rock ͚delightful͛, Steve Lamacq praised their ferocity upon catching their SXSW set, Everything Everything cited them as ͚their favourite new band͛ while speaking live on Radio 1, shortly before inviting the band to support them. After neglecting to hold the lift door open at an airport for Idles, the band were somehow asked to support them too. Jen was voted 8th ͚Best New Guitarist In The World͛ in Total Guitar and to top it off – they͛ve been invited to play on the main stage at this year͛s Kendal Calling.

Venting the heightened emotions of frustration that unite many of us through sheer noise and energy, whilst deftly mixing grunge with alternative rock, critics have compared the group to Verruca Salt, The Smashing Pumpkins and Garbage. Lyrically half pop culture junkie, half moronic anti-anthem; the instrument-swapping trio͛s songs are laced with equal parts of joyful catharsis and dissonance, their changeable attitude to front-person and drummer fostering inclusivity and a sense of unpredictability. Unashamedly independent and multi-disciplinary in their approach, members of False Advertising also work tirelessly behind the scenes on creative projects with a growing list of well known bands – recently including production for The Orielles and design work for The Arctic Monkeys and Noel Gallagher.

A creative force to be reckoned with, they are currently working on their own new album at Paul Epworth͛s Church Studios which is due out towards the end of the year.