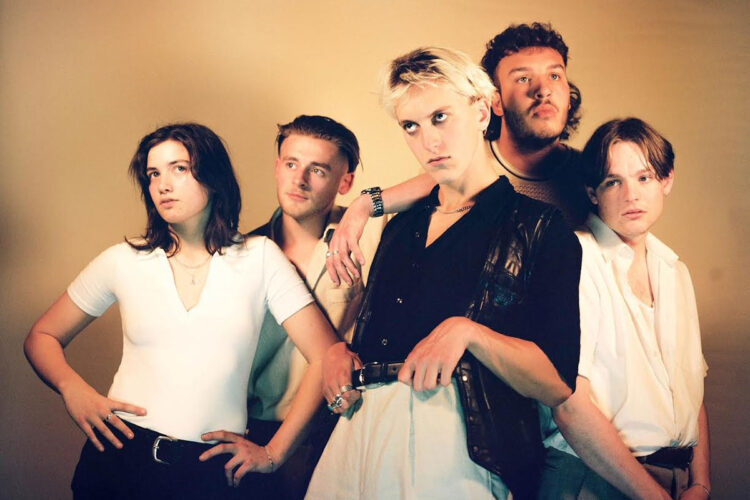 “Nothing is more exciting than starry-eyed potential, and Priestgate have that in spades” - 4* Dork

“Innovative and intriguing, this is a stellar debut” - 8/10 Gigwise

Ascendant Yorkshire five-piece Priestgate have released their debut EP Eyes Closed For The Winter on Lucky Number (Sunflower Bean, Dream Wife, Hinds, HMLTD, Walt Disco, and more). The EP has already received widespread acclaim from the likes of NME (where Priestgate were immediately crowned a First On artist and an inclusion in the NME 100 followed in January this year), Dork, DIY and Clash plus the title track was Next Wave on Jack Saunders BBC R1 Future Artists show.

Raised in the sleepy town of Driffield, Priestgate are Rob Schofield (vocals), Bridie Stagg (drums), Connor Bingham (guitar), Isaac Ellis (guitar), and Kai Overton (bass). The nucleus of Priestgate came together after Ellis was recommended to the band by none other than Schofield’s dad, who he works alongside building coffins as his 9-5 job. Soon after Overton, a mental health worker for the local council, completed the line-up.

Formed as a battlecry against the restlessness and mundanity of rural life, Priestgate began as a reaction to the sparse local music scene around them, which in turn has allowed them to craft and develop their own unique sound without the added pressure of conformity. Drawing comparisons to The Cure and The Maccabees, Priestgate have combined bright guitar-pop hooks with darker lyrical sensibilities, concocting their own angst-laden blend of the hypnotic and euphoric.